Okay, so, I have written an entry of what happened last night: the two minutes quake in Jakarta, caused by a 10 km depth quake somewhere in Banten sea (Southern part of West Java) which magnitude is 7.4 Richter Scale. I wrote about the people I informed and received information from: my children, family, friends, and also Ace–my dearest friend in Netherland.

I sent him some screenshots from government’s announcement regarding to the quake and early tsunami warning. And I also sent him the 2 minutes video I recorded when the quake was happening, where the chandelier in the middle office room swaying–although not violently, still it’s quite “impressive” since the chandelier is big and heavy, and yet it swayed, caused by the quake.

The one thing freaked me out is because the quake is a quite long. Solid 2 minutes, I told you! Isn’t earthquake usually only happens for 30-40 seconds? It may stop and shake again, but not that short, right? Well, this is kinda my first time experiencing 2 minutes of earthquake. I recorded it and I touched the wall to make sure whether it stops or still shaking. Well, it was still shaking.

Anyways, I know, Ace must have heard the news by then, about earthquake in Jakarta. Not (just) Banten, not Bali, not Sulawesi, but Jakarta. And I know, I am the first person he thinks about, since I am his best true friend. 😅🙏 Well, Pak Yana (his driver in Jakarta) also live here, in Bekasi, which is near Jakarta, but I’m not sure Ace would contact him to ask if he’s alright. 😅

And, yup, Ace called me about 30 minutes later. Asking how I am. As expected, he also learned of the early tsunami warning issued by the Government of Indonesia, to warn people who live in the coastal areas along Banten shore and also Lampung, Sumatra.

When he called, the connection was bad. And I can hear his frustrated voice. He was annoyed by the bad internet connection. But I calmly answer him. 🌼💃 When finally the connection improved, he sounds relieved. We talked like normal, but not so much. I mean, I can sense he’s worried sick for me, but the covered it all very well within his (nervous) laugh. He tried to teased and joke with me, and of course I laughed too.

“No, really, it’s going to happen. You must find higher ground and save yourselves..”

“Uhm, hopefully nothing’s gonna happen. If it happens, then I’ll see you on the other side, A. I’ll meet you in the gate of jannah, inshaallah. I’ll make some reservations for you there,” I chuckled.

He laughed awkwardly at first, but I let him know that I can handle such jokes, so he continued the joke. We both laughed and he kept teasing me with scary tsunami joke. 🤣 He knows I have sarcasms in my blood and I can handle even the harshest jokes.

“I can hear the rumble, sound of the tsunami right now,” he said it.

“How do you know it’s the sound of tsunami? It’s the sound of my breath, A. You hear it wrong,” I replied. He laughed quite long. Still worried, but a bit relieved, I think. Knowing that I am still very relaxed and calm about the whole things. 😜

Oh, Ace, can’t you see I am the one who understand and laugh at your wicked jokes? 😁

Too bad we didn’t talk much, since he has to attend Juma prayer. “Pray for me, A,” I said. A bit seriously.

“Take your time. Stay healthy and pray for us, yes? I’ll be here, inshaallah..”

And he said the salam very cheerfully. I know he is now calmer and happier to hear me taking everything easy, and not panicking. 😊🌼 If I were panicked and stress up, I’m very sure he will fly 14,000 km from Netherlands to Indonesia just to accompany me. 😁😅

Don’t worry, Ace. Allah is protecting us all, inshaallah. I’ll see you soon in Jakarta, yes? I miss you and I love you. You’re my best friend and love of my life. Wallah. And Allah knows it. 🌼🐰 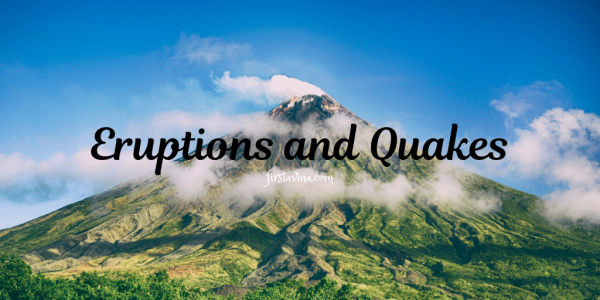 Today, Tangkuban Parahu volcano (in Bandung) erupted for the third time this week. And just 1.5 hours ago, earthquake in Jakarta.

I was still sitting on my chair at my work station, finishing my monthly report, when suddenly I felt the desk shaking side by side. The water inside my glass also shaking quite hard. My office mates and office boys shouted, “Gempa ini. Gempa!” (Earthquake. This is earthquake). Some are doing takbir and istighfar. I froze and tried to not panicking.

I updated a Facebook and whatsapp status, “Wow.. Gempa..” (Wow, earthquake) to let my distant friends and family know what was happening, just in case they couldn’t reach me afterwards. No, I don’t need any fame from any status I made. I learned from some past passing friends as we cherished their last thoughts they put on their social media. If that were my last hour of living, at least my friends and family know what happened to me. I know it sounds “lebay” (means overreacted), but that’s what I was thinking.

Anyways, the quake happened for a solid 2 minutes. Now that is very long! Normally, earthquake only happens for 20 to 40 seconds, but this was different. I told ya, solid 2 minutes, maybe more. Because I took a video of the swaying chandelier at the office (mid room and also the lobby). Its duration is 2 minutes and 1 second, and the quake already happened for at least 15 seconds. And while quaking, I keep pressing my hand against the wall. It’s still shaking, so it means the ground still shaking too.

After the quake stop and settled, I checked on my children via WhatsApp Group. My daughter is on community service in Bogor. All Indonesian college students are required by the university to do this before we graduate and earn our degree. She informed me she felt the quake quite hard. I replied, yea me too. Her brother, my son, however, didn’t even realize it was quaking. 😅

However, after checking on my children, I reached my family–dad, sisters, brother–and also relatives who live in another cities and island. My dad and sister lives in Bali island (about 900 km away from Jakarta), they felt no quake. My relatives in Bandung (West Java, about 200 km away from Jakarta) felt it. But not as hard as Jakarta, I assume.Still, it made people who were attending the public places (malls, cinemas, restaurants) panic.

This is the hardest quake in 2 years in Jakarta, Bogor, Bandung, even Lampung. And guess what, the government issued early tsunami warning about this. Ouch!

The next thing I did was messaging Ace in Netherland. “Jakarta just quake for 2 minutes. Potentially tsunami.” and I also sent some screenshots of the government’s announcing the occurrence and early tsunami warning via their social media channels.I haven’t spoke with Ace for days now. It’s not normal for us, since we always talk. But I understand he needs his time alone, away from phone calls, I know.

Anyways, we both promise to keep informing each other the importants. If I didn’t inform him any of this news, that is an insult for our friendship. I understand that, he understood that.

And I also know he will freak out, even raged, if anything bad happens to me. 😅 As much as it’s fun to see him panicking, I don’t want him to fly from Netherland all the way to Indonesia (again) just because he fears something bad is (or will be) happening to me. 🤣 He may not say it loud and clear, but I know he loves me that much. As his true friend. #ouch #friendzonesucks 🤣🤣🤣

I will continue to write again about this later. Just please pray for us, may the tsunami not really happen to us. Thank you. Barakallah. And for all my brothers and sisters who live along the coastline of Banten and Lampung, area, fii amanillah.

May Allah protect us all. 🙏 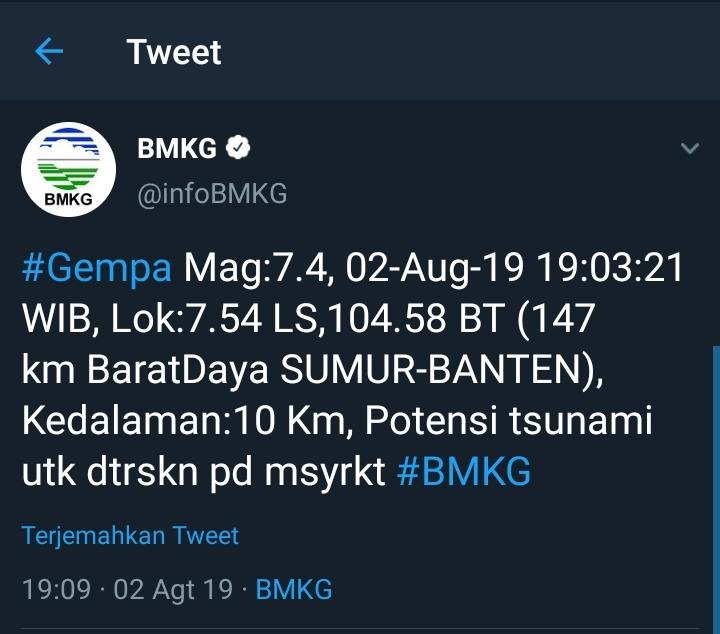 Last Saturday, a tsunami wave struck and destroyed three districts of Indonesia: Lampung Utara (of Sumatra Island), Serang and Pandeglang (of Banten, in Java Island). Death toll reaches 400 and counting. Dozens still missing. Hundreds of buildings, houses, hotels, are wrecked, heavily damaged. There was no earthquake, so nothing triggered the early warning system. Experts think, the tsunami was caused by collapse after the Anak Krakatau volcano erupted.

This disaster had become a highlight not only local medias, but international medias as well. It’s only natural because Krakatau volcano can be a very serious threat. The last time it erupted was 1883, and it caused massive disaster in Indonesia, all the way to the rest of the globe, even America continent. The ashes flew so high and so thick, the sun ray could not penetrated the smoke, causing Indonesia–this tropical country–suffered 8°C temperature for months. Surviving people at that time were facing froze to death threat, crops dried out, children were dying from hunger. Awful, AWFUL, time. Guess the world still remember and took record on that hundred years ago. We know, we do. 🇮🇩

And of course, not only the volcano eruption, tsunami is also deadly that caused death toll at that time very high. About 38.000 deaths, I think (if I can still remember good of the history I learned in the school). And that was ancient time where people are not as many as they are now. Sumatra and Java islands are Indonesia’s main islands, where most of Indonesians live here. If the eruption happens again, plus tsunami hit Banten, Lampung, Jakarta (where I dwell), Tangerang, Bekasi, Cianjur, Sukabumi, as predicted, well…. Almost certainly, the death toll will reach millions. I’m not kidding. Jakarta alone is inhabitated by about 11 millions people. And not to mention the Bodetabek–Bogor, Depok, Tangerang, Bekasi (cities that surround Jakarta), about 20 millions more live in those cities. Don’t believe me? Google it. 😁 Well, my data may not be very accurate though.. It’s just a rough calculation. Do your own homework, dude. 😋

Anywaaaaay.. My entry for now is these link of videos made by the UNESCO: short educational films about tsunami. My teammate at the office group shared it, and I thought, well this is useful, so I’ma sharing it with the world via my blog, because why not, right? So, enjoy. Hope the information is useful. 😉🙏

Well, if you guys heard about volcano eruption, landslides, earthquake, tsunami happen in Indonesia, please pray for us and wish us luck.. 🙏😊 May Allah protect us all. 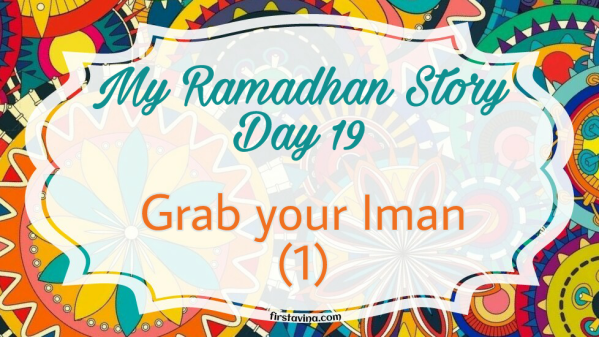 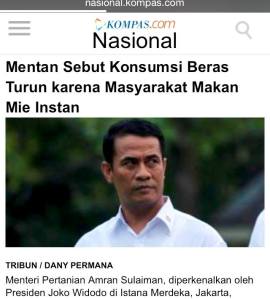 Come on, wake up, you guys! 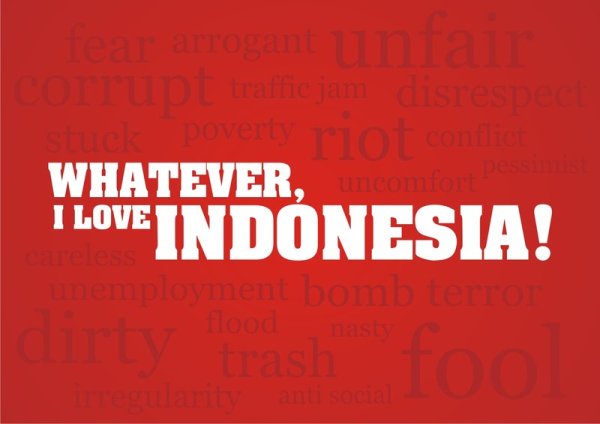 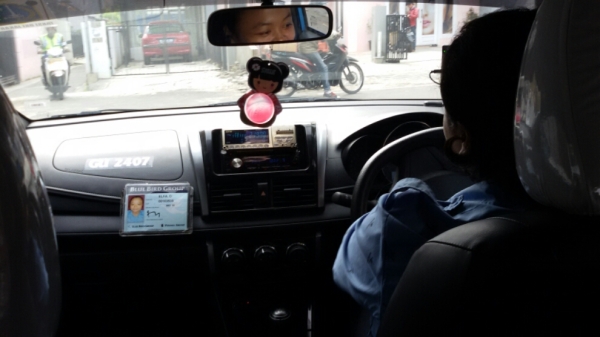 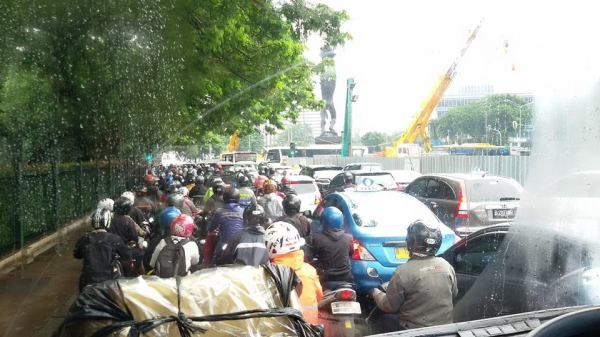