This morning, while I’m having breakfast on my office desk, I watched Markiplier’s video upload about anxiety attack simulation. It’s interesting for me, because I don’t think people around me get such attack other than panic attack. And even that, I rarely seen.

Below the vid, I read so many comments about people experienced anxiety attack. They both commented about how accurate the simulation is, and also wrote about how hell-ish it feels, when you’re having one. The explanations they wrote, somehow saddened me. Yet, I am curious.

First of all, when it comes to psychological disorder, I knew that sometimes it happens almost for no reason whatsoever. They’re just, well, having it. Most of the disorders triggered by something–incredible pain (both physically and/or psychologically), broken heart, and other traumas.

I don’t have anxiety attack. But I do suffer “severe” depression every now and then. Depression that sometimes make me wanted to kill myself. I already wrote about this few months ago, and how I deal with it, and not to kill myself in the end. 😀 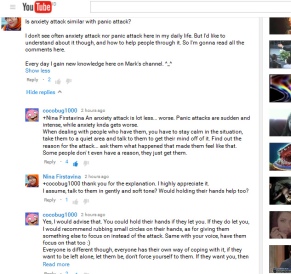 In other hand, I know people who have regular panic attacks. Not so many, but I knew some. One of my friends even suffer bipolar disorder (he did a lot of drug-like medical prescriptions to make him feel better), and my high school best friend also suffer depression-almost-schizophrenia (she used to have Xanax to ease herself). But I don’t have any idea what to do when these attacks (anxiety or panic) hit people near me–or people I loved.

And so, I asked the forum about this. The response was amazing! I will copy and paste our meaningful and full-of-knowledge conversations via the comments.

Nina Firstavina
Is anxiety attack similar with panic attack? I don’t see often anxiety attack nor panic attack here in my daily life. But I’d like to understand about it though, and how to help people through it. So I’m gonna read all the comments here.
Every day I gain new knowledge here on Mark’s channel. ^_^

cocobug1000
+Nina Firstavina An anxiety attack is lot less… worse. Panic attacks are sudden and intense, while anxiety knda gets worse.
When dealing with people who have them, you have to stay calm in the situation, take them to a quiet area and talk to them to get their mind off of it. Find out the reason for the attack… ask them what happened that made them feel like that. Some people don’ t even have a reason, they just get them.

Nina Firstavina
+cocobug1000 thank you for the explanation. I highly appreciate it. I assume, talk to them in gently and soft tone? Would holding their hands help too?

cocobug1000
Yes, I would advise that. You could hold their hands if they let you. If they do let you, I would recommend rubbing small circles on their hands, as for giving them something else to focus on instead of the attack. Same with your voice, have them focus on that too 🙂
Everyone is different though, everyone has their own way of coping with it, if they want to be left alone, let them be, don’t force yourself to them. If they want you, then be with them. Have them find their happy place.

Nina Firstavina
+cocobug1000 noted. Wow.. Thank you. I will not forget this. Ever. ^_^ When in the future I found this situation, I would know how to handle it, and it’d be thanks to you, my friend. ^_^ ❤

norahsz
+Nina Firstavina as someone who’s been having panic attacks for over 5 years (haven’t had that many lately fortunately), I’d say take them to somewhere quiet without a lot of people, ask them what they need (it might be different for everyone), try to stay calm and not make a big deal out of it, and just let them know you’ll be there to help them if they need it (but also leave them alone if that’s what they want).
make them drink cold water, I cannot stress this enough, interestingly enough my panic attacks are often caused by slight dehydration which sends my body into panic mode.
ask them to breathe more slowly (breathe in for 3 seconds, hold it in for one sec and then breathe out for 4-5 seconds). if it helps them, ask them to hold one palm in front of their nose like a cup and breathe into it, it’s basically the same as breathing into a paper bag. I hope this helps 🙂

Nina Firstavina
+norahsz I think this would helps a lot, thank you, dear. Okay so the keys are full support, quiet place, talk in calm voice, “distraction” for the mind, and cold water? Wow, new knowledge. I’m glad to have met you guys.
You’re having it for 5 years and haven’t had it many lately, how did you manage to keep it (become less and less)? Your effort must be, I can’t even start to imagine–but it must be incredibly difficult; but you made it. Wow..

Jessica Daugherty
+Nina Firstavina as well as someone who has severe panic attacks in random, you have to ask the person if its okay to touch them. When i have them, you absolutely can not touch me. As well as that not all panic attack and anxiety attacks look the same. Some are outwardly noticeable, like mine, and some arent. Its generally a quick onset of ticks. I scratch and rock. I dont realize Im doing it. Its also heavy or shallow quick breathing, as if youve been running a marathon. Going somewhere quiet is the best thing, and just try to talk the person out of it. Or find something they like to do, like coloring, and try to get that for them.

I replied–seriously. They’re the toughest people.

Nina Firstavina
+Jessica Daugherty I will keep this in mind. Okay, so not everyone that has it wanted to be touched. I really need to remember this. Because I am positive that my first reaction, when I see anyone experiencing anxiety attack, would be hug or hold their hands. That would bad, if they don’t want to be touched.
I notice, from many of the comments from our friends here, anxiety attack might takes hours? Oh my God. I can’t imagine. You guys are the toughest people on earth for surviving it over, and over, and over again.. hugs

DaPlayerofgames
+Nina Firstavina I’ve had to deal with them for 8 years now I still have them and something you need to understand is what they’re feeling I think a pretty accurate guess is to take the worst sadness, the worst pain, and the worst absolute dread you’ve ever felt and multiply it by 50 that’s about how bad it is but it is different for everyone.
DaPlayerofgames
+Nina Firstavina the longest one I’ve had took I think 5 hours but it’s hard to tell when you’re having one

Nina Firstavina
+DaPlayerofgames oh my God.. I feel deeply sad that people could experience such terrible feelings in this anxiety attack. And dealing it for years—oh my. It breaks my heart. And yet, somehow feel proud to know that you guys survived each of it. I think you should be proud with yourselves too, friends.. I may not have it, nor ever experienced any of it, but really, I would do anything to make you understand that I, we, will be here for you, somehow. 🙂
Nina Firstavina
+DaPlayerofgames 5 hours? Oh my dear God… How… How did you survive it?

DaPlayerofgames
+Nina Firstavina I have no idea because trust me when I have one I feel like it takes days for it to end but it probably takes like 1 hour usually and that 5 hour one was actually when I had one for the first time so I had no idea what to do which is why it took so long.

He got me speechless.
There’s another response–but I didn’t get the no (1) comment though.

Anonymous_Buddha
(2) I get really tense and the slightest noises make it worse. I feel anxious energy in my skin like I need to run away. My heart speeds way up and I’ll generally start trying to cover my lower face with my scarf or sleeves as if to hide. At this point one of two things happens. Either I get up and go somewhere to calm down, or someone asks if I’m ok.
Unfortunately if this happens before I notice I’m not ok, I tend to verbally lash out. Not directly at the person, but I’ll start listing the things that are wrong even though I haven’t quite figured it out myself, but in an angry/upset way. Now, my friends can recognize this and pull me away. People who aren’t familiar with me might misconstrue this as annoyance. So you just have to keep an eye out and an open mind. Otherwise you might not realize someone is anxious, not angry.
Anonymous_Buddha
(3) My apologies for posting such a long response. I can go into more detail but I don’t want to completely spam you.

Nina Firstavina
+Anonymous_Buddha my dear, I didn’t get your comment number (1)
Oh, so anxious attacks would look like they’re angry? Do you mean with the swears and random rambling too?

norahsz
+Nina Firstavina basically yes (also that breathing technique I described in a few words). the first few years were horrible, I almost dropped out of school because of it, I had to see a bunch of different therapists (none of whom could help me) and I was prescribed medication. my panic attacks came at the worst times, usually in public so I didn’t even want to leave the house.  it took me years to learn how to deal with them on my own (learning proper breathing techniques, paying attention to early signs of anxiety and stopping them before it turns into a full blown panic attack etc.). I don’t know exactly what’s helped me, I wish I did so I could tell about it to others, but it was a long learning process. I think having supportive people around you is very important, people who don’t make fun of you or judge you. if any of your friends ever has to deal with anxiety, just let them know that it’s not their fault, that it’s okay to feel upset about it and they can reach out to you for help if they need it. feeling like you have noone to turn to is the worst feeling if you have anxiety.  I won’t lie, even with all the help one gets it won’t be easy but it’s possible to live with anxiety without letting it ruin your life. I still have anxiety and I often have trouble falling asleep but I haven’t had a full blown panic attack in a while 🙂
norahsz
+Nina Firstavina well for some people it may take hours but usually it’s 10 to 30 minutes (it seems a lot longer though).  as for hugging and holding hands, some people might appreciate it but it’s safer to just ask them what they need, whether they’d like to be left alone or for you to stay with them.

The breathe technique! Gotta keep that in mind:

Nina Firstavina
+norahsz noted. And, ah, yes, of course the breathing techniques. That’s the hardest part to remember. Thank you, dear, you taught me so much about this. And thank you for all friends who had responded here: cocobug1000, Jessica Daugherty, DaPlayerofgames, Anonymous_Buddha. High appreciations from me for you guys. You’re all wonderful and strong..

Ah, today’s been great. I learn something very useful today. Thank you for all friends who had responded here. Feel free to read and watch the video below: