Despite of some people’s negative opinions toward my life, there are legit reasons why I fell in love with my boyfriend, D.

First of all, he might not like me calling him as a boyfriend for it sounds “so teenagers”–well, it sorta does indeed, since I am now 36 and he’s 41. *LOL*

He liked to consider us as soulmates. So, it’s not a simple relationship.

Soulmates are two people who share mutual positive feelings. They’re unnecessarily needed any definition, but they ARE bestfriends, partners, lovers, even relatives, all at once (the same time). That’s, at least, OUR interpretation of “soulmates”.

Anyways, here are the reasons why I fell in love with him in the first place. And the feeling continues to grow wiser, inshallah, each day.

It begun with simple discussion about work. He’s a very smart man. His attention to details is uncanny. And then I started to open up a little about my personal life, since he stated his concerns to see me, as if I’m in some kind of depression–like I said, his attention to details is uncanny! I didn’t need to declare myself a stressful woman, he already read me well back then. And so, I told him about what’s bothering my mind: my fragile marriage which problems just rotated around the same issues and how it made me running around in circle, without moving forward nor developed whatsoever.

At that time, he gave me logical opinions. Psychologically, socially-speaking, and religiously. He encouraged me to fix my marriage. But I already felt sceptical about my marriage, since it’s already broken since 2011. And I really don’t want to talk further about why it’s broken. Too long of a story. ^_^

Anyway, at the very same time, my friendship with D was misunderstood by my former-spouse. He accused D as the reason I asked for divorce. Accused me cheating. Helloooo, wasn’t it you who divorced me, again and again and again, and not in contrary? My former-spouse stated the word “divorce” a little TOO MANY, really. It’s actually an insult to me, but I used to keep patient. Well, not THIS time!

This time I stood up and answer his “challange”. Enough is enough. He insulted me a little too much with that divorce word! So, really, if I finally stood up for myself, it was PURELY MY DECISION. Not being influenced by others and not even D–who was originally only a good friend of mine!

I am a consenting adult. I made my OWN decision and I don’t NEED anyone else make the decision for me, really. So, It’s completely irrational to blame anyone else but ourselves–me and my ex. And since I’m a responsible adult, I take full responsibility of my own decision. 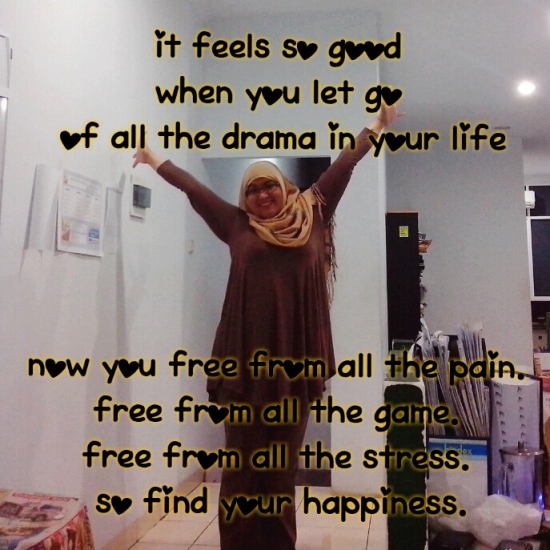