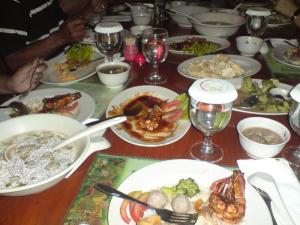 Actually, I’ve planned to go to my mother’s place in Bandung, but I ended up stranded with my aunt’s grand vacation plan in Puncak (around 50 km from Jakarta and 130 km from Bandung). It’s because my ride suddenly had a battery trouble. It won’t start! It’s either because of the freezing rain that fell all night and the battery is already overdue (it’s simply its time to “cough”, maybe!)

Whatever that is, my husband objected if we had to go to Bandung as it’s still a long way to go. We wouldn’t want the car to break down in the middle of the road, would we? So, we canceled the Bandung plan and stayed in Safari Garden Puncak.

I felt somehow terrible, because my mom was waiting and I promised her to come to relative’s house today. Anyway, I told Mom that I couldn’t come because of that car’s battery matter. She understood, beside the traffic on Puncak area is insane!! Everyone is coming to Puncak to spend the last weekend before back to the office this Monday.

But instead all that, my in-laws allow us to have lunch at the hotel’s restaurant. And, the foods are great! The 8 of us (me, my husband and my in-laws) ended up so full! Just look at the picture.. 2 portions of Brocolli with Shrimp, Oxtail Soup, 2 portions of Fried Calamary, 2 portions of Buttered big Prawns. And as the dessert, they served small bakpau (steamed Chinese bun filled with sweet jam) and fruits (green melon and red watermelon).

So, it’s apparently grand supper as the exchange of the mad traffic and troubled car’s battery. A good deal, in my humblest opinion. Hehe.. Happy holiday, everyone!